By ReblDyne and Truth News International

UPDATE 1: Here are two screenshots of “LGBT Uganda Updates,” one of the article and one of the post on Facebook.

UPDATE 2: And here’s how they describe the situation on Facebook in a post. View the screenshot of that post here. “With him in hospital for weeks,” and “as of today, Andrew is reportedly improving, but it will be weeks before he is restored to full strength.” Take a good look at the person on the picture. He’s not getting out of any hospital anymore. The guy is DEAD.

UPDATE 3 is at the end of the report.

UPDATE 4: Turns out the photo was uploaded, even earlier than previously stated, by Katie Ballard on 8/25/2012.

Currently there’s a photo circulating on the internet, allegedly displaying the burning of a gay person. The website that is linking the gay part of this story to the photo is this website: “LGBT Uganda Updates,” in their article “Kill Gays Bill” Passes, Sig. of President Expected Within 30 Days.”

Indeed, it seems to be a fact, according to the BBC, that Uganda has recently passed a reviewed bill that would make homosexual acts, and the not reporting thereof to the government, illegal and punishable by law.

However, the featured photo that is being used is not linked to the gay law and has nothing to do with the gay community. As far as it is traceable, it seems that the owner of the photo posted it on May 23, 2013 with the following description and comment: 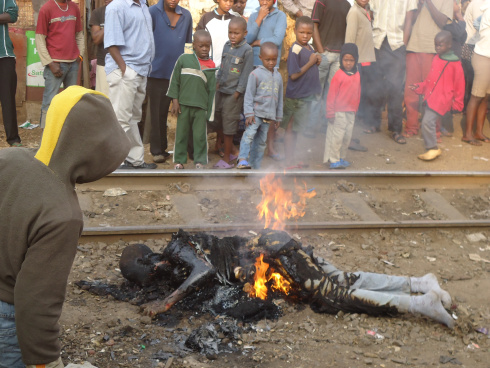 It is obvious that the photo is being used to give more weight to the article. It’s a shame and a slap in the face of real journalists and reporters. Abusing someone’s torture to sell your story is a cheap shot!

Unfortunately, some members of the gay community have faked hate against gay people before [1, 2, 3, 4, 5], which of course doesn’t mean that all hate speeches and acts against gay persons are false. It just illustrates that this case with the photo psyop is not the only case where people create fake situations or misuse information.

UPDATE 3: Here we have another picture from “LGBT Uganda Updates” their Facebook page. Look at the guy on the left, marked in pink. To him a holocaust is pure fun. And the guy on the right, probably asking where the UN is. Let me tell you, the UN is busy planning their Agenda 21!

Deception is Worse than the Nuclear Attacks